that’s actually not a salutation in some exotic language.  it’s the name of this dress.  boucherouite is the name of the fabric i used (and apparently some style of morroccan rug…?), and washi, of course, is the name of this very popular frock by none other than madame rae.  in a few days, i’m flying home to michigan (alone with two toddlers, yeah!) for my cousin’s bridal shower.  i don’t own anything appropriate to wear because, as i’ve noteed, i dress like a slob, and last time i was in chicago i tried on my sister’s entire extensive dress wardrobe and wasn’t happy with how any of it fit.  a perfect excuse to graduate to making my own dresses!  and, in case you were sick of my favorite field of weeds, this gorgeousness is just a short stroll from my front door as well, so i thought i’d switch it up.  have i mentioned i LOVE WHERE I LIVE?

of course, deciding what dress to make was far more difficult than actually making it.  i picked up a handful of mccall’s patterns on major sale at joann’s a few weeks ago, and planned to use one of them for the occasion.  but, after reading through the “instructions” a few times, i was petrified to attempt any of them.  we just spent a long weekend in santa cruz where i logged a few hours on separate days at this awesome store  (where i left feeling totally overwhelmed and anxious after a lifetime of fabric shopping online), and i picked up several yards of the boucherouite (that word has got to be french based on the number of consecutive vowels) with the intent of making it into a dress for myself.  actually, i initially got a yard of it in the other colorway for bean, and got this colorway for myself on a different day without realizing they were the same…obviously i love this fabric.  anyway, i sketched a few designs, but with the shower looming near, it quickly became clear i needed to leave it to the experts and not take on drafting my own pattern and sewing it in one week.

last week, a higher than average amount of cute washis started popping up on blogs i frequent, along with tales of ease of construction, comfort, utility, and flattering fit (check out cherie’s maternity washi, for example).  having just spent 8 million dollars on fabric, i wasn’t thrilled to spend $16 more with the plethora of patterns i already own.  but after conversing with this week’s washi queen, my bud venus (check out her washi rampage here and here), i was convinced.  and i’m so glad i did.  not only did this one turn out great, but i’m totally sold on the pattern and excited to make several more (tunics as well).  it’s like buying a big bottle of olive oil…hurts the wallet that day, but then you use it and enjoy it enough to make it worthwhile.

before i made this dress, i was skeptical about using quilting cotton for a woman’s garment.  however, the design of this dress really plays to the strengths of the fabric, which is great since it is light, breathable, and comes in so many cute prints.  and what they say is true–the dress itself is roomy, comfortable, flattering to many women’s body types (i only ever hear the thin and hard bodied girls complaining the empire waist makes them look preggo–for the rest of the population, empire waists are the way to go).  and it has pockets!  i’m not sure why these are such a novelty since i never put anything in the pockets of a dress, but it gives my hands something to do during the awkward photo shoots.  suddenly, i have a new respect for models.  how do you stand around all day with someone taking pictures of you and not feel totally ridiculous?!  i digress.  anyway, of course, as it’s written by rae, the instructions are also very clear, and it only took two days start to finish, piecing the pdf pages, drafting my own facings, muslin and everything.  this one’s a winner, folks.

a few words on construction.  i made a muslin, guys.  i’m a real seamstress now.  i did it for fit initially, to make sure the darts were in the right place (they were).  but, i ended up scooping out the neck quite a bit, and drew those modifications right on the muslin as i wore it, like a plastic surgeon.  i might have gotten carried away since i think the neckline puckers a bit, but it appears totally normal in photos.  since i don’t [yet] have a serger, i finished the side and waist seams with french seams.  of course, i could not french seam around the pockets, but i did before and after the pocket with just a normal seam around the pocket (which i completed in one continuous seam when i did the second half of the french seam, if that makes sense…if not, email me and i’ll try to explain more clearly).  somehow, that worked out quite well.

the fabric appears to have no print repetition, but actually it does.  and i tried really, really hard to match it up!  except on the sleeves, which seemed impossible after several attempts.  anyhow, the print is busy enough that any little flubs are well camouflaged.  drafting my own neckline also meant drafting my own facings, which i was pleased to do successfully, until i went to bind the sleeves and ran into some added bulk and awkwardness that, at the lowest point, led to me stabbing my seam ripper into my sewing table in a fit of rage.  but in the end, both sleeves are attached cleanly, and look just fine from 5 feet away.  and after hearing that story, you probably don’t want to stand any closer to me than that anyway, so it all works out. 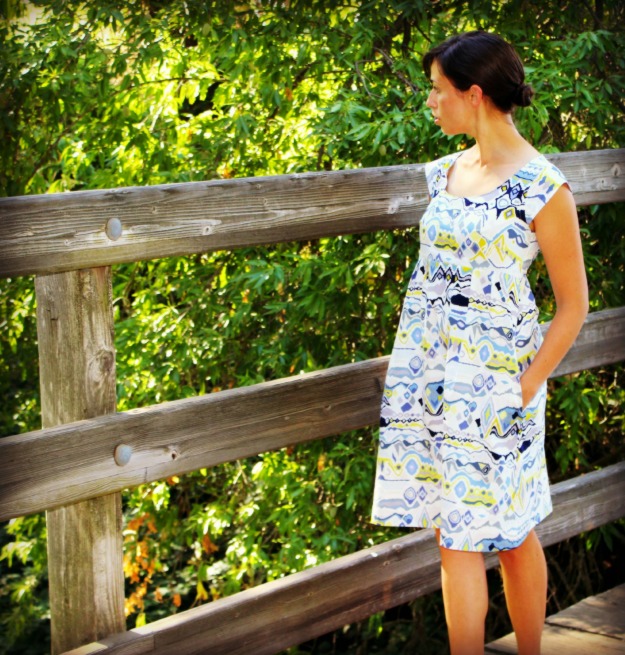 so, there you have it!  my first dress for myself (the wiksten tank dress does not count, since i’ve decided for women of my age and modesty, it’s really just a long shirt).  i love it!  rae is always posting little tutorials on ways to modify the pattern with sleeves, alternate collars, lengths, etc, so you can expect to see many more of these in my sewing lifetime.  so tell me, do you washi?