i had an awesome mother’s day.  it’s starting to get pretty hot here in the central valley, so the kids and i have been scoping out shaded parks.  they’re finally at an age where i don’t have to be that crazy mom on the playground climbing play structures far too tiny, bonking my head and getting stuck on the slides, and instead i can sit under a tree and knit while imaginary t-rexes chase them into exhaustion before nap time.  it’s divine.  after a leisurely morning at our new favorite shade park, we headed out to st. helena and tried out this awesome farm to table restaurant.  the food was fantastic and the ambience can’t be beat.  for this occasion, i wore this little black dress i made as a mother’s day gift to MYSELF.

i have SO many patterns and SO much apparel fabric right now, mostly leftovers from my mohr studio women’s brainstorming process.  it’s difficult to narrow down exactly what i want to make for myself, since i’m working very hard at making things only that will be practical, useful, well loved parts of my wardrobe, per the guidance of wardrobe architect.  i’ve been wanting to try out this pattern for months, since i think a solid breezy sleeveless button down would get a lot of mileage in this climate.  then i saw this cute little dress on sarai’s ig feed, and the wheels started turning.  given that i have NO interesting buttons (which i now more than ever appreciate is a major problem that needs fixing) except some floral white ones my friend jami picked up for me at an estate sale, i decided to go with black lawn for the dress fabric.

i made a couple initial modifications to the pattern to make it more similar to the piece that inspired it.  i lengthened the pattern by about 11″ to make it closer to knee length (once it was otherwise completed, i shortened it and shaped the hem after i could see what it looked like on).  i removed a lot of ease…i can’t remember how much exactly, but at least 4″, and i gave it some waist shaping.  i also added some in seam pockets, because pockets are awesome.

by the way, does everyone feel as absurd being their own model as i do?  i feel like my already questionable modeling skills have been declining sharply and my face had to be cropped out of 98% of these photos.  usually, david will just take 100 of photos in about 60 seconds and a small handful will be usable.  this was the first time that i scrolled through them quickly, and in every. single. one. i was blinking, scowling, or otherwise looking preposterous.  we had to do a second photo blitz and still, my face just would not cooperate.  so i hope you enjoy my chin. 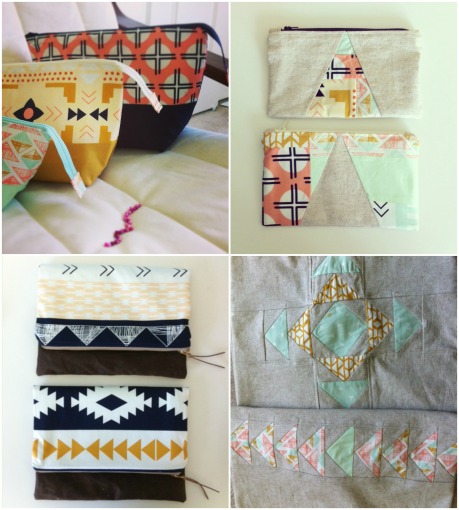 anyway, back to the dress!  i found a small window to make it after a crazy quilt market sewing spree for my buddy april rhodes, who had her debut quilt market booth with her new line, arizona (get your preorders in!!).  i was totally thrilled to be able to contribute to her huge accomplishment and get a sneak peak of her fantastic line, but i had four days to sew as much as possible, so let’s just say not everything was 100% up to spec.  i was excited to take my time with a project and really do it right.  i found the pattern facilitated really nice finishing, which is one of those simple pleasures that really gives me joy.  it did ask for a lot of hand finishing, but i opted to use the machine for speed and reliability. 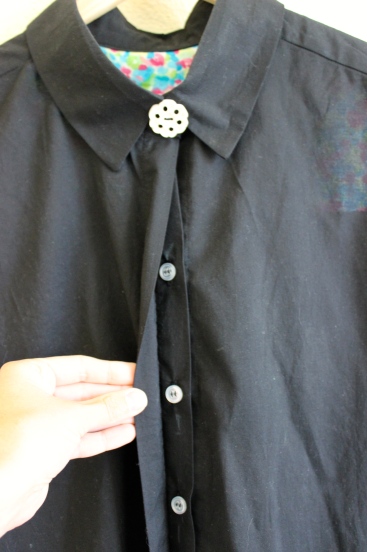 it has a button fly, which gives the front a nice, clean look.

the yoke totally conceals all the raw edges.  i LOVE it when this happens.  also, i like opportunities for surprises on the insides of garments.  this is nani iro double gauze left over from bean’s birthday dress last year.

i waited to make the buttonholes until after i finished the hem, so i could make sure the hem was even where it met in the front and the buttons were evenly spaced.

once i had pretty much completed the dress, i could see the shoulders were way too boxy, and the arm scythes were weirdly deep.  i mean, it doesn’t even make sense how deep they are.  i was able to angle the shoulders in a bit, about 1.5″ on either side, but of course, you can’t add fabric, so the arm scythes remain quite scandalous.

if i make the pattern again, i will totally redraft the armholes to reflect these changes, but it will require a reworking of basically every pattern piece as a result.  but, the fit will be much better.

the other major issue that wasn’t obvious until the dress was already finished is that i look like a priest.  the big white button on the collar of a totally black dress…didn’t quite translate how i’d envisioned.  but i have no other buttons!  fortunately, this is an easy fix once i get an alternate.  on the brighter side, i’m not the only one who takes fashion cues from the catholic church (and one of us arguably knows about fashion):

who wore it best?

karl lagerfield doesn’t have adorable accessories like these, though.  the dress is super comfortable, and in a slightly different color palate with just a few more tweaks, it’s pretty much perfect.

10 thoughts on “mother’s day dress: who wore it best”